The questions below are from our inaugural CGF trivia night, which was played in the Jeopardy format of answering with a question. There were two rounds of the contest, each with six categories which are listed below. Questions are arranged by category, sorted from easiest to most difficult.

To reveal answers, tap or click on the question. Good luck! 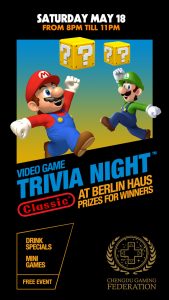 This gaming system, released in 1972, popularized home gaming with cartridge based games.

Controversy around this 1992 fighting game led to the creation of the ESRB rating board.

What is Mortal Kombat?

This game designer coined the phrase “Deathmatch” and created one of the most iconic FPS games of all time.

Who is John Romero?

This Japanese game designer popularized the survival horror genre in 1996 with the release of a game about the S.T.A.R.S. task force investigating a disappearance near Raccoon City.

Who is Shinji Mikami?

Nintendo cosmetically modified this Japanese game for the international release of Super Mario Brothers 2 in 1988.

What is Doki Doki Panic?

This console popularized the use of motion controls and casual gaming with a bundle of included sports titles.

What is Nintendo Wii?

Later versions of the NES launched with one cartridge that had these two popular games on it.

What are Super Mario Bros and Duck Hunt?

What is the Ouya?

The SNES Classic launched with and included this game as a special exclusive, which was never released on the original SNES.

Sega’s ill-fated last console included this unique memory card which could be removed from the controller in order to play a pre-loaded virtual pet game.

What is the VMU?

This blue mascot was the showpiece of Sega’s Genesis console in 1991.

What is Sonic the Hedgehog?

This video arcade depicted in the movie Tron was the portral through which Jeff Bridges’ character entered the video game.

What is Flynn’s Arcade?

This graphical technology allowed SNES to produce faux 3D graphics in games such as F-Zero and Super Mario Kart.

Marge Simpson carries this weapon in the 4-player arcade beat em up “The Simpsons”.

What is a vacuum cleaner?

The 2018 consensus Game of the Year was this Playstation exclusive game starring Kratos.

What is God of War?

In the latest iteration of Mario on Switch, Mario travels between worlds with this airborne vehicle.

What is a hot air balloon?

This congratulatory phrase which appears on the victory screen of PUBG became a global gaming meme.

What is Winner Winner, Chicken Dinner?

This latest iteration of a beloved sci-fi RPG series was widely mocked for its laughably bad animations.

What is Mass Effect Andromeda?

The protagonist of CD Projekt Red’s 2015 smash hit RPG hails from this place.

What is The Longest Journey?

What is Rogue Squadron?

What is The Legend of Zelda: Ocarina of Time?

“All your base are belong to us” is a popular internet meme spawned from this Megadrive game.

What is Zero Wing?

CGF is an initialization which stands for these three words.

What is Chengdu Gaming Federation?

What is Mortal Kombat 11?

CGF begun hosting events in this year, in Machu Picchu.

This is considered by Saif to be the greatest game of all time.

What is GTA V?

This long-time CGF member created our one off papercraft koopa shell trophy for our Mario Kart tournament.

Who is Dan Coleman?

This American-Canadian game programmer is famous for his work on the strategy game series Civilization.

Who is Sid Meier?

This entrepreneur left Microsoft to found a legendary company and achieve demigod status in the game industry.

Who is Gabe Newell?

Cuphead, Monument Valley, and The Forest were created with this game engine.

This Australian independent developer was first contracted by Sega to port Sonic games to mobile platforms, before being granted permission to develop his own homage to classic 1990’s Sonic the Hedgehog games.

Who is Christian Whitehead?

This president of Nintendo passed away in 2015 and was temporarily replaced by Shigeru Miyamoto.

Who is Satoru Iwata?

This post-apocalyptic series developed by Bethesda originated in 1997.

Because of naming discrepancy between the US & Japan, this game is known as both 3 and 6.

This aquatic sport is the main form of entertainment in Spira.

What is Blitz Ball?

This inventor is responsible for creating a teleporter which malfuntions and leads to time travel in Chrono Trigger.

This 1976 computer game, created by a member of the team who built the Arpanet, is often credit as being the first RPG.

What is Adventure? (also known as Colossal Cave Adventure)

This popular games removal from the App Store in 2014 caused a sensation, and iPhones with the game pre-installed were sold online.

What is Flappy Bird?

This political and military hotspot was home to the worlds most dangerous & infamous Pokemon Gym (now deleted).

What is the Korean DMZ? (Demilitarized Zone)

This phrase which includes the name of the fictional dystopian location of Papers, Please expresses patriotism.

What is “Glory to Arstotzka”?

2048, the puzzle game published by Ketchapp, was widely interpreted to be a clone of this award-winning game released in 2014.

This character in Civilization is ironically fond of initiating nuclear war with rivals.

This Metal Gear Solid villain could read the contents of the memory card in your Playstation.

Who is Psycho Mantis?

This artificial intelligence villain lures the player with a cake.

The primary antagonist in the Street Fighter series goes by this name in Japan.

What is Typing of the Dead?

What is “Mr President”?

What is “Bushido Blade”?

What is the Playstation startup sound?

What is the PUBG lobby music?

What is Cave Story?

Identify the stage in which this F-Zero song appears.

What is Mute City?